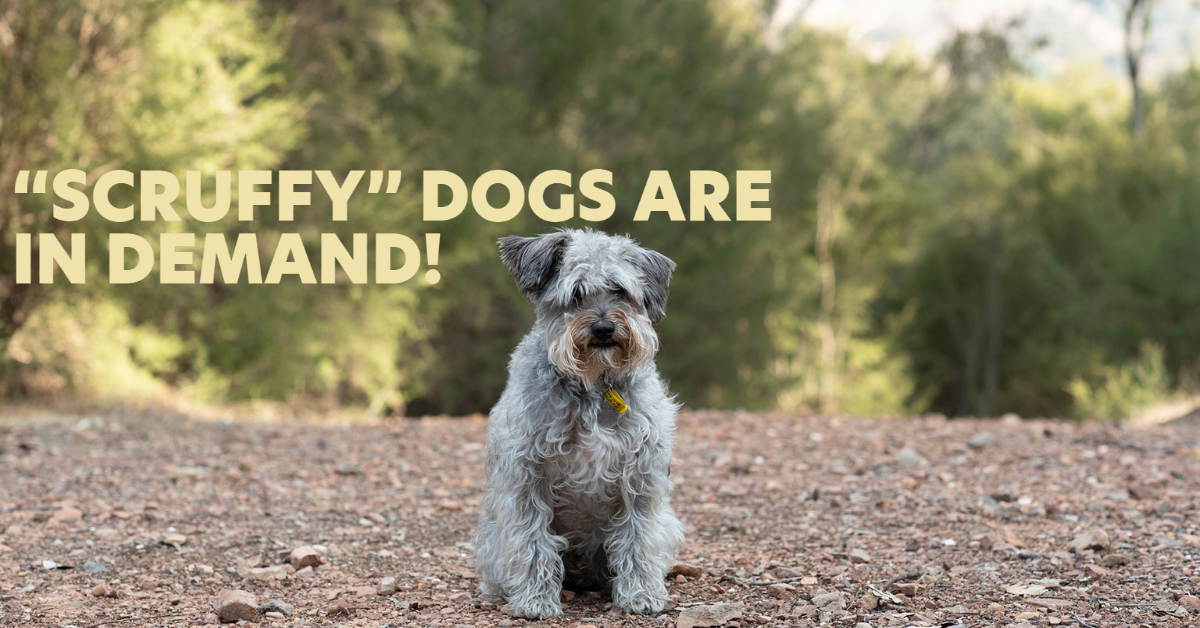 Mixed breed, fluffy and scruffy dog models are in demand!

Scruffy, fluffy dogs and crossbreed dogs have never been more popular in TV, film and media and here at Urban Paws UK, we love them all!

The huge rise in popularity of mixed breed dogs has given a real boost to the diversity of dogs as often the puppies that result from these matings have all different types of coats and colours, injecting lots of variety into the dog acting industry.

Often we don’t know the crosses that make some of our beautiful dog models as many have been rescued. Their individual characteristics can really stand out on stage and screen.

Great for advertising, these unique looking pets can model at an editorial level as well as representing brands on social media platforms such as Facebook and Instagram.

There are also plenty of pedigree dogs that can have a signature scruffy look dependant upon their grooming. Some favourites include:

Some of the long-coated pedigree dogs often have puppy cuts which can give that scruffy look if needed such as:

Some of the most popular adverts featuring scruffy dogs are animal charities such as the PDSA, Dogs Trust and the RSPCA. These adverts usually focus on abandoned animals and raising awareness of dogs not being cared for in the UK.

The latest TV superstar is Woofles who stars in his own show on CBeebies. This mixed breed pooch really is the star of the screen, delighting children everywhere.

You may have noticed scruffy dogs are BIG in car adverts for brands such as Volkswagen, Citroen and Subaru, all getting in on the act.

Films are also amazing for fluffy looking dogs with Hotel for Dogs, Benji and Pupstar all utilising the cute power of the scruffy dog! Some of our pet dog actors that shine in stills and film include Tulip, Bea Colin and Roxy. Tulip is an amazing mix of Pyrenean Sheepdog cross Chinese Crested Powderpuff, Bea, a collie cross, Colin, a poodle mix and Roxy a Jack Russell cross Poodle.

There is a prestigious annual competition for mixed breed dogs…Scruffts! This celebrates crossbreed dogs all over the UK and promotes responsible dog ownership. Many of the dogs are rescue dogs as are many of our top models. So don’t ever think a rescue, crossbreed or scruffy dog can’t be a model. We love them!

A lot of these mixed breed pups are shooting to fame on social media and it’s clear to see the impact they have on brands. They have quickly become some of Urban Paws most popular social media pet influencers and get hired for regular jobs due to their engaging posts.

Stars of Instagram show off their fur using #scruffydog. Many of our social media influencers fit the bill and can advertise products online, which is a cost-effective way for brands to promote their products and services. Just a few examples of our social stars are Bramble and Hazel, Iggy, Betty, Lilly-Rose, Gus and Bullet.

These gorgeous mixed breed and scruffy dogs are available for pet modelling, acting and social media promotion and we are always looking for more so contact us if you would like to rent a scruffy dog or if you have a well-trained pooch that really stands out from the crowd then get over to our become a member area.